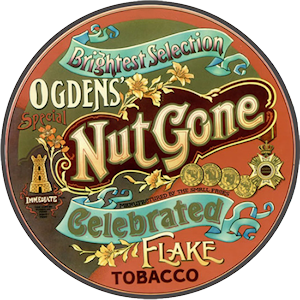 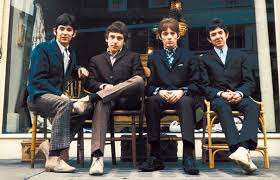 Small Faces made a major change in sound with Ogdens’ Nut Gone Flake. Like many bands of the mid-‘60’s, a very of-the-time pop/rock band had gone psychedelic. It’s not your run-of-the-mill release though. It’s difficult to say when there’s a mass movement like this whether a band is simply jumping on board or are being authentic… or a mixture of both. Regardless, this is one of the more far-out releases of the era.

I don’t think I even would have heard of this band if my obsession of Andy Partridge from XTC didn’t himself have an obsession with this band. In fact, XTC’s 60’s psychedelic side project, The Dukes of Stratosphear’s second release, Psonic Psunspot (1987), drew direct inspiration from the trippy spoken word passages on this album.

The production is drenched with slightly off-kilter psychedelic elements that make the album itself a trip to experience. It sounds like… drugs. In every way. There are two major elements that put Small Faces on a different playing field from most psychedelic rock bands of the ‘60s: the vocalists stand out for being able to truly sing, unlike many of their rock-based contemporaries. Just listen to “Afterglow of Your Love.” The second aspect peculiar to Small Faces are the moments of exaggerated Cockney-Accented singing. “Lazy Sunday,” one of the bands biggest hits, albeit only in the UK, is sung in this manner. As is “Rene.” These unexpected changes can psych you out if you’re in a psychedelic state yourself. There is something so freaky about hearing psychedelic music sung with this particular accent. It’s really quite jarring.

I may catch some flak for this, but I recommend listening to the Stereo mix (Disc 3 of the release on Spotify). The odd ‘60’s production where drums and bass are on one side and odd, hard to identify instrumentation and guitars on the other, adds to the overall feeling of wtf-is-going-on-ness.