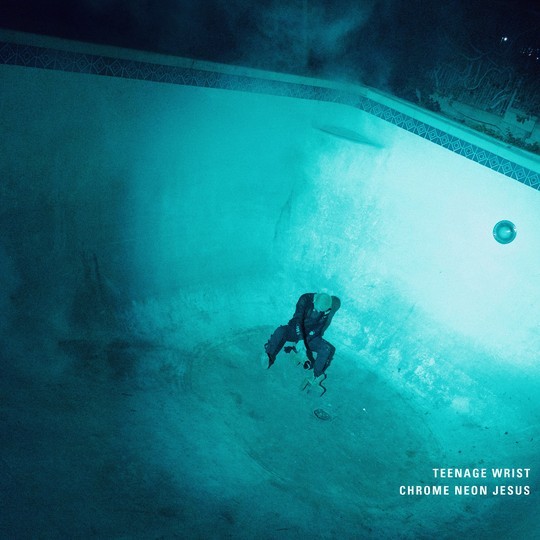 The Los Angeles based trio transcends the stale, reserved boundaries of alternative rock with their warm, dynamic, hook-soaked debut full-length album, Chrome Neon Jesus. The album is a breath of fresh air in a monotonous scene.

Teenage Wrist joined the Epitaph family in the fall of 2017, arguably becoming one of the label’s most exciting signings in a number of years. On Chrome Neon Jesus, the band shows tremendous growth since their 2015 debut EP, Dazed; further aligning their footing with heavy influences of shoegaze, garage, and post-grunge. While their aesthetic has not drastically shifted since Dazed, Chrome Neon Jesus is the product of a band that is perfectly honing in on their sound; demonstrating carefully structured song writing, captivating vocal performances, and strong pop sensibilities. This is an album that’s meant to be played loud, so make sure to turn this one up.

Within the first minute of Chrome Neon Jesus, Kamtin Mohager’s airy vocals float the album’s first hook past the listener’s ears; fading out before pulsing bass, driving cymbals, and roaring guitar flood the speakers. It’s crystal clear from this exact moment that Teenage Wrist bares no qualms about stepping to the forefront of alternative rock.

Their heartfelt, authentic tap into 90’s and early 00’s alternative music is proudly on display through the next few tracks, as the band channels elements of Smashing Pumpkins, Swervedriver, Failure, Slowdive, and My Vitriol. “Dweeb” and “Swallow” carry the lush, overdriven flow over from the opening track, both providing absurdly catchy guitar hooks that will be stuck in your head for days on end. The simple, repetitive chorus of “Dweeb” is nothing short of an earworm, growing stronger and stronger upon each listen. “Swallow” features some fantastic work from the rhythm section, a nice reminder that great drum parts don’t always have to be complex.

“Stoned, Alone”, the album’s standout track, encompasses every facet of what makes guitar based alternative rock kick-ass. The rolling bass line in the beginning of the track instantly locks the listener in with killer tone; while whispery vocals drenched in reverb begin to deliver a wonderfully crafted verse. Marshall Gallagher’s guitar and Anthony Salazar’s drum parts come crashing through the mix, daring the listener to refrain from head banging to this stellar track. The chorus is joyfully redolent of Ken Andrews’ work in Failure, and ON, while falling within the vein of Smashing Pumpkins; flirting with the infectious hook criteria of the mid-to-late 90’s that would have assured heavy rotation on alternative rock radio.

The ballad-like aura of “Supermachine” dials in to subtle Slowdive influences, delivering soft, drifting verses, paired well with punching choruses. The track is the perfect palate cleanser before the latter half of the album kicks off with “Black Flamingo”, yet another ripper with a releasing chorus that will become a guaranteed fan favorite at live shows. Perhaps one of the most intriguing tracks on the album, “Kibo”, represents a near cut and run of the quintessential My Bloody Valentine sound, paying tribute to the profound soundscape influences of Kevin Shields, whose dream-like guitar work in My Bloody Valentine sculpted a monolith of innovation that pours over into the blood work of an untold number of bands today.

Closing tracks “Spit”, and “Waitress” demonstrate the bands’ ability to pay attention to dynamics, proving again that they can check marks outside of the alternative rock box with ease. The somber make up of “Spit” gives the listener one last chance to breathe before “Waitress” and all it’s heaviness starts to ramp forward. It’s at this point where all of Teenage Wrist’s influences pour forth into one final track of their shoegaze driven, emotive alternative rock. The album fades out with catchy instrumentation that just beckons for another listen.

Chrome Neon Jesus is one hell of an impressive debut album from a band with a bright future. This album is currently flying under the radar, but in no way should be a sleeper release of this year.