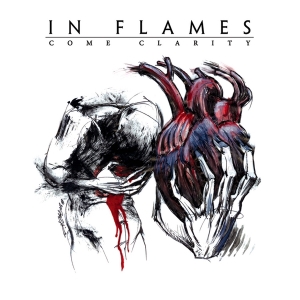 Come Clarity finds In Flames somewhere between the melodic death metal of Whoracle and the alternative sound of Soundtrack to Your Escape. The mixture here provides for a highly emotive and energetic set of songs.

Perhaps the best example of said highly emotive and energetic tracks is the incredibly impressive early run of this album. The first three tracks specifically, are perfection. Not that it heads downhill anytime soon. “Dead End” and “Scream” are right up there in quality level. “Scream” features some trash metal elements, atypical of the band, while “Dead End” features some well-placed vocals from well-known Swedish singer-songwriter Lisa Miskovsky.

The pacing is simply immaculate up through the title track ballad “Come Clarity”. This is one of In Flames’ softest moments of their careers, but it is quite simply a very powerul song. Anders’ unique clean vocals really works out spectacularly here. It’s a highly impassioned and moving vocal performance. There are also some very interesting and tasteful production choices to flesh out the instrumentation of this track.

In Flames again brings in the thrash with “Vacuum”, before going more straight Melodic Death Metal for the instrumental passages. The chorus though is again, highly melodic and powerful. There’s even about a second of blast beats towards the end!

Continuing the mixture of moods and styles, “Pacing Death’s Trails” probably contains the largest mix of their disparate musical interests along the heavier spectrum all in one song. It starts out heavier, like something you’d possibly hear on Clayman, while the rest is all Whoracle or Colony.

“Crawl Through Knives” plays in a similar fashion but also reinforces the notion that In Flames shouldn’t have given up the dual-harmonized guitars or guitar solo’s for even one album. In fact, as proven here, reintroducing these elements on top of their then-recent more alternative metal leanings, proved to be quite an excellent fit. Another powerful chorus further ensures this album belongs in the upper echelon of metal.

“Crawl Through Knives” bleeds into the next track “Versus Terminus”, which features another thrash metal passage before heading back into more typical In Flames territory, though maybe at a faster tempo than normal still. Another great chorus saves this song from being rather run-of-the-mill. “Our Infinite Solution” is probably the weakest track on here. Removing this and the final track would make this album just about perfect, as it would not interrupt the flow, and 40 minutes is even a preferred run-time.

Even considering the different musical elements thrown in, there are moments on “Versus Terminus”, as well as on “Vanishing Light” and the entirety of “Our Infinite Solution” where things start feeling a little same-y. Though perhaps this is particularly highlighted by these tracks being towards the very end of the album. This combined with the final track, the instrumental “Your Bedtime Story is Scaring Everyone” being another throwaway track in my opinion, keeps this album from being perfect. However, not before or since have In Flames better mixed their diverging influences and sounds to such grand effect. I’m of the position this is only a marginally-flawed metal masterpiece that belongs in any even casual metal fans collections.